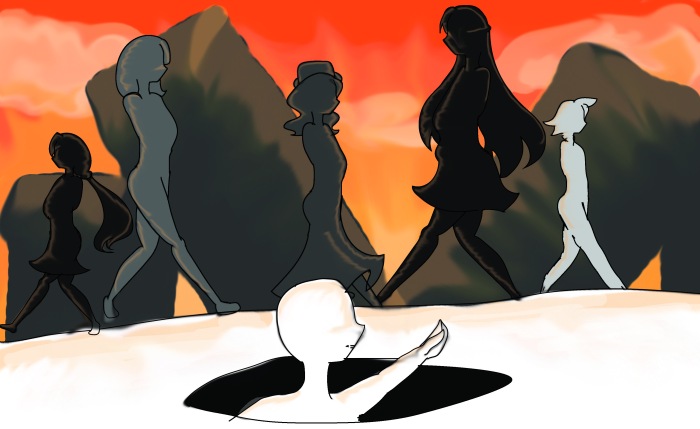 Illustration by Quyen Than

I fell in a hole today, again, like always. Funny thing was, it was the same hole. I’ve known it for pretty much my entire life. I don’t know how it happened. It was just there one day, and I never saw it as I drew closer. It started out shallow. A foot deep. Now, this probably sounds like quite the cavity in the ground, but I assure you that was only the beginning. So, I fell in and looked around to see if someone had seen me make a fool of myself. Sure enough, there was one person in front of me. A girl, about my age with nice brown hair and marvelous blue eyes. She wore a bow and giggled at me. My cheeks turned red so I gazed down to get my footing and before I knew it, she was gone.

The next time I encountered the hole was weeks later. This time it was more deep and broad. It was only after the fact that I fell in did I take notice. Getting up and brushing the dirt off my clothes I looked up to see another girl. She wore a nice floral dress with a sun hat. She had wavy blonde hair and her jade eyes the size of the moon. She too smiled at me and I began to climb out of the pit, but to my surprise, she vanished.

About a month later it happened again, but something had changed. Not only was this hole deeper and wider, but the girl looking down at me… she spoke to me. We had a pleasant conversation about how I ended up down there. I learned her name, Makeliah. After our brief discussion, I climbed out, and wouldn’t you know? She disappeared.

This persisted over and over again. Sometimes I was stuck for an hour, or sometimes for days on end. At one point I was trapped in that hole for months. The girl that came that time? Her name was Alex. She kept me alive, fed me, talked to me. But when I say “fed me”, I mean she kept throwing bones at me, like I was a dog. Eventually, I climbed out of the pit, by now a hundred feet deep, and she was thin air.

This hole kept changing in depth and width with each passing girl. I kept getting bamboozled over and over again. Let me tell you, my dear friends— I was going insane. For many years I couldn’t escape the plans of this hole. It was out to get me and it always got me at first, but I always won. Freedom was always mine. Then it changed its tactics. It once bought a man into the game. He was admittedly quite handsome, mind you. Johnny was the devil’s name. He wore a black leather jacket and looked like a movie star. I was stuck conversing with him for a week.

Once the hole nearly had me in its clutches for good. It ensnared me almost one hundred and fifty feet! But the girl! This girl was by far the most beautiful. Her name was Cassandra and her favorite thing to do was make music. Her voice was like warm milk and from one hundred and fifty feet down, her perfume took over my very being. And so I climbed and climbed from this pit. As I was within ten feet of Cassandra, another woman came into view behind her. Her beauty kicked Cassandra’s to the curb and like that Cassandra was smoke. With the arrival of this new woman, I stared at her until I found myself further down in the chasm. The void between us grew another hundred feet. This did not stop me. Nothing could. I ascended from that hell and made my way to meet her. Closer and closer I scaled to her and she commenced to laugh at me. Disregarding her laughter, I made it out to see her fade away into nothing. I didn’t even know her name.

The years kept piling up and the girls were all different. No one came to my aid at all, and that was fine. I eventually came to being a professional at evading the hole. I got so good that I finally was able to see the hole coming, after so many years of constantly falling. It was only recently that I realized that I wasn’t the only one. Practically everyone was prey to the pit of despair. So here I am, disclosing all of its secrets, to warn you, my friends, to beware of this hole. It feeds off your curiosity. It waits patiently for its next victim. It will try to fool you and it will succeed time and time again. This chamber of depression, burrow of pain, den of tribulation. This hole will either ruin your life or enchant it based on how you react. I have made signs along the pathway to guide young souls away from it, but I fear that won’t be enough. I must name it. Give it a title that everyone will know, so that if they ever come upon it, they will think about how to approach it. What shall I name this hole? The bane of my existence, the damned chasm that wields the power to alter life itself? Oh, what name is deserving of this hollow?