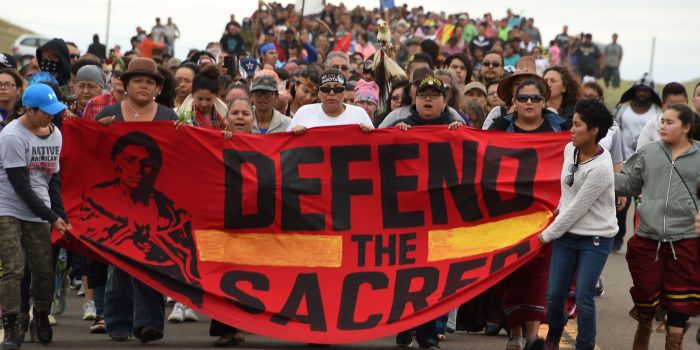 The Standing Rock reservation has been the site of much controversy these past few months, issues including the environment, Native American rights, and police brutality present in this intense standoff.  The fact that it took President Obama so long to intervene made people question his abilities during his last year as Commander-in-Chief.  In the end, the Army Corps of Engineers said the Dakota Access pipeline must be rerouted.

The protests at Standing Rock began in early spring of 2016 when the Dakota Access Pipeline was planned to go under the Mississippi River and Lake Oahe, which happens to be the Standing Rock tribe’s main water source. The pipeline was also going to go through an ancient burial ground, which of course would cause many problems. The tribe saw this as both a threat to their water source and to their cultural way of life. The Native Americans then decided to set up camp there, blocking the way for the pipeline. This is why they are called water protesters by the media and many others.

By the time September rolled in, thousands of people went to the camp to help with the protest. Many from other tribes across the country, even everyday Americans, came to show support despite the large crowds being perceived as a threat by the pipeline’s security forces.  As the number of protesters grew, the more confrontations and problems occurred. A few of the water protectors were even injured by attack dogs. This continued until late October when militarized police and the National Guard intervened.

Clashes between protesters and police began to turn violent as time went on. Police were seen using tear gas, rubber bullets, and even water hoses during sub freezing temperatures. Many videos surfaced on social media of protesters being beaten down by police who were wielding batons. Although most videos don’t show how the altercation started, there is reason to believe that there were some cases of police brutality at these protests, though there may be other reasons behind these claims. The United Nations even performed an investigation to see if human rights were an issue here. They believed that the protesters were treated in an inhumane way, especially when detained.

As time progressed, clashes between protesters and police began to occur more often and more violently.  At one point, a man carrying an assault rifle began yelling and threatening to shoot police from the water protector’s side.  After reservation police took the man down, they found an ID on him saying he was part of the pipelines security forces. This of course created unrest and distrust around the entire issue. Media coverage was at a low on the subject and not many knew why. Most of the coverage came from videos and pictures the protesters put on social media.

On November 25th, the Army Corps of Engineers ordered the Native Americans to vacate the area by December 5th. They refused to leave, but the Army Corps said they wouldn’t force them to leave, which may have been Obama silently taking the Native Americans side on this fight. On December 3rd, everything changed. Around 2,000 veterans showed up in support of the Native Americans. They took the stance that under the oath they took joining the armed forces, that they also have to protect US citizens on the domestic side, not just the foreign. They believed that the Native American treaties were not being upheld, that human rights were infringed during altercations with police, and that the pipeline was a serious threat to the Native American people. Although pipeline supporters have said that it is very rare for a pipeline to burst, just north of the reservation, a part of the Dakota Access pipeline burst sending tons of oil onto the land. Evidence like this caused the Army Corps of engineers to deny the pipeline the route through the reservation. They now officially have to reroute it.

This successful protest is a very historical one indeed. It was the first time in many years that the federal government took the side of the Native Americans. It showed that when a protest is relatively peaceful like Standing Rock, it can actually work. The protest brought many people together from various tribes, to veterans, and even everyday Americans who felt the Native Americans got the short end of the stick. One iconic moment at the end of the protest was when a group of veterans participated in a forgiveness ceremony where they said sorry to the elders for how they have been hurt by the US in the past.  It was a true symbol in how our country is continuing to get better and learn from our mistakes.

One issue still stands in the way however. With Donald Trump as President-Elect, and outwardly saying he was for the pipeline, there is a chance he could overrule the ruling. With plenty of his cabinet being pro oil or owning oil companies themselves, there is a chance that cases like these may not have the same great outcome. If there is one thing we have learned from these protests however, it is that the citizens of the country are the ones that change it. If we stand united like they did at Standing Rock, then we should have nothing to fear.