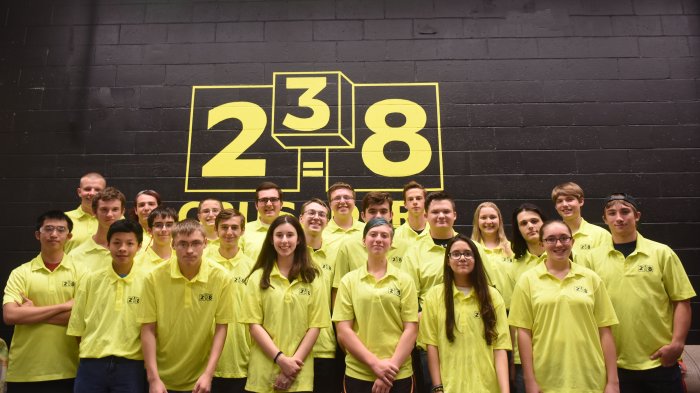 After a long season of competition, Memorial’s For Inspiration and Recognition of Science and Technology  (FIRST) Robotics team set a school record by reaching the semi-finals of their division in the World Championship held in Detroit over school vacation week.

Memorial’s FIRST Robotics Competition (FRC) team, 238 Crusaders, had six weeks to plan, program, and build a robot from scratch. The robot was designed to complete the components of a game that was released at the very beginning of the building period.

After the six week build season there is the competition season. This is where the game, uniquely designed each year, is played.

This year the game was FIRST Power Up. It was a retro arcade themed game and playing field. There were two major parts to a match: autonomous and teleoperated. In autonomous, the opposing alliances are not allowed to drive their robot, so for 15 seconds the robots have to complete tasks with nothing but preprogrammed instructions. In teleoperated, the last 2:15 of the match, the students are allowed to take control of their robot to complete activities with more precision.

This year the team’s robot was named CATWOMAN, because as a part of their strict branding standards all competition robots must have the names of Batman villains. The practice robot was given the name of the villain’s alter ego, in this case, Selina Kyle. While practice robots are not always made in addition to the competition robots, this year the creation of a second robot came in handy.

The district championship was held in Boston, MA in the Agganis Arena. It included 63 teams from all over New England and our school’s team was in 37th place by the end of qualifying matches. They were then asked to join the third seeded alliance, which allowed them to partake in semifinals and finish in third place overall.

The world championship event that Memorial attended was in Detroit, MI. It was a much larger event than the prior competitions. There were hundreds of teams from all over the world, so they were divided into six categories. The subdivision that 238 was in had 67 teams. By the end of qualifying matches, the team was ranked 47 overall. Despite their low standing they were invited to play with the fourth seeded alliance and made it to semifinals before they were eliminated.

This was a fantastic season for the Crusaders and all of their hard work definitely paid off. In the end, they made it farther in the world championship than they had in the entire history of their team, which was founded in 1992.